Last week, twenty-two students from our Aboriginal Education program had the very unique privilege of working with self-admitted ‘junior’ elder, Wayne Louie of the Yaqan Nukiy (Lower Kootenay) Band of the Ktunaxa Nation. The keen group, under Wayne’s mentorship and guidance, completed the first of two procedures to build a seven foot replica model of the sturgeon-nose canoe. WiYAŧ ʼA-K´UN YAqsuʼmiŧ has been used by Wayne’s ancestors for thousands of years to access the bountiful land throughout what is now southern British Columbia, northern Wyoming, eastern Washington State, Idaho, and southern Alberta.

Wayne, a survivor of the Sixties Scoop, is a man of few words. Quiet, unassuming, and eager to share his knowledge and culture, his desire to ensure that the traditions of his ancestors live on is to say the least, powerfully humbling. For Wayne, the sturgeon-nose canoe is one of the few remaining artifacts left that still give his people their identity (“no other group of first peoples on Turtle Island build and/or use such similar technology”). The incredible patience and perseverance that Wayne modeled as he meticulously tied delicate strips of burnt cherry root to the newly constructed boat frame and ribs did not go unappreciated by the group of students ranging in ages 11-13. However, when it was their turn to fasten the assembled pieces there was a palpable hesitation. Many students shared that they did not want to do it incorrectly or ruin the work so far. With a gleam in his eye Wayne simply replied, “if you do it with you heart, there’s no wrong way.”

There is something truly raw and guttural about using just your hands and the supplies that nature provides to produce something so useful. So necessary. So elemental. So beautiful. Through his reverent manner, Wayne shared the process (only after prayers of thanks to each individual tree for its sacrifice) he learned to procure all of the materials that nature provided from his ancestral home on the Kootenay Flats of the Creston Valley. No duct tape. No staple gun. No Gorilla glue. The students and I were left reckoning with that statement. When the group ran out of body planks during our first session (after several accidental breakages during sanding and whittling) Wayne shared as a matter of factly that he “couldn’t head to Home Hardware” but would need to go “back out onto the land” to gather more materials. Wayne naturally weaved his story and culture back into the lesson bringing the group full circle.

As Wayne guided students through the frame-building process, I was struck immediately by the natural and authentic ways that he connected learning with culture, story, and history. Of course it was easy–it’s embedded in Wayne. It’s a part of him. He knows no other way. This is how he was taught his people’s traditions. He comes by this naturally. There is truly no substitute for hands-on, holistic, story-based, and contextualized learning. The enthusiasm, desire to learn about culture, and connections that are created during the building of the canoe was a powerful testament to the need for indigenous ways of learning, knowing, doing, and teaching in our contemporary classrooms. 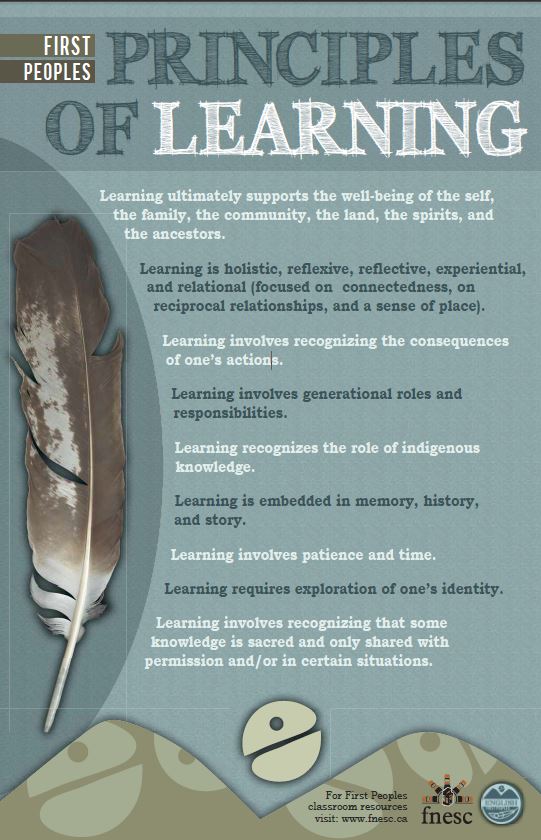 Many times our colleagues are often unsure where to begin to start indigenizing their curriculum. I think that a possible starting point for any ‘settler’ wanting to move forward is to understand and then adopt the First Peoples Principles of Learning as the way things are done in their classroom and school as a whole. The necessary pedagogical shifts towards indigenous ways of teaching and learning in our education system would witness positively dramatic changes. Attitudes and desires to move past both empathy and acknowledgement of reconciliation towards doing our part as educators to move the process forward is now our work.

Sometimes the bravest and most important thing you can do is just show up. ~Brene Brown, PhD.